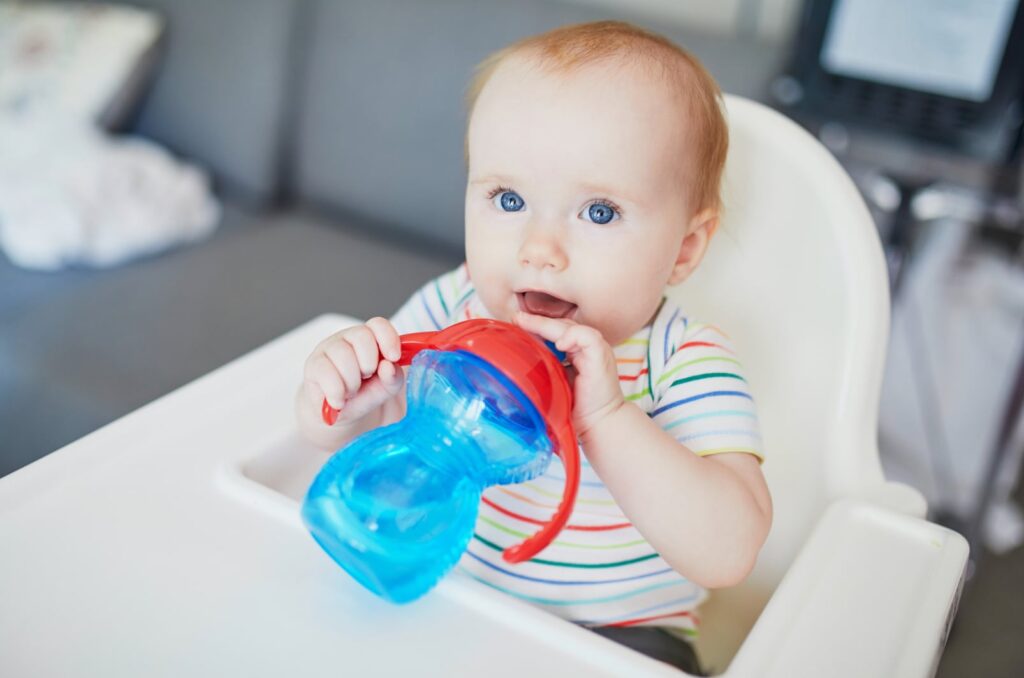 The sippy cup is a spill proof, lid-covered drinking cup designed to help parents teach their toddlers how to drink without spilling. Children can toss it, drop it and turn it upside down, but they can’t spill its contents. That’s thanks to a valve in the top that releases liquid only when a child puts his lips around the tip and sucks. Day after day countless parents reach for that sippy cup their toddlers love so well, proud that the bottle is a thing of the past, and thrilled that their car seats and living room carpets will be spared!

These parents though, should think twice before resorting to extended use of the sippy cup.

Many parents operate under the mistaken impression that the sippy cup is better than allowing the child to sleep with a bottle. The damage done by the bedtime bottle is fueled by the fact that no saliva flows during sleep to clear liquids from the mouth or dilute them. Liquids bathe the teeth all night. The sippy cup filled with sweetened liquids can cause the same damaging effects. The child’s teeth are immersed in the liquid during drinking and many parents allow unlimited access to the sippy cup.

The American Academy of Pediatric Dentistry recommends that children be weaned from the bottle by 12-14 months of age and be encouraged to drink from a cup. Parents are cautioned however that the repetitive consumption of liquids that contain fermentable carbohydrates (milk, juice, soft drinks etc.) from a bottle or sippy cup should be avoided.

• Be very selective about the liquids that you give your child from sippy cups. Avoid milk, juice, and soft drinks. Try water or sugar free beverages instead.

• Use the sippy cup only as a transition to a regular cup or adult drinking glass with no lid.

• Consider cup design carefully. A pop-up straw reduces the amount of time the liquid is in contact with the teeth.

• Some speech pathologists have expressed concern about over use of sippy cups and liken its use to a thumb-sucking habit, the effects of which are well documented.

Give us a call if you have any questions or concerns!